To save on limited disk space I have archived many older and less popular live recordings. Can't find a show you are looking for? Contact me and I will re-upload.

To commemorate the 10th anniversary of the Leannasaurus Rex "Hot Summer Jams" CD release, I remastered the tracks using newer (better) music software and have put them on the site for download. Due to COVID plans for a LSRX reunion show summer 2020 were put on hold.

Currently offline as I am remixing/remastering and combining into a single "Lost in Time" special release that includes the best tracks and some bonus material, for spring 2021 release.

I played 21 shows with Doc Tictock and the Mistletoe Medicine Show at Santa's Wonderland in November and December 2017. On a few nights we recorded multi-track audio and multi camera video. From that I created a series of youTube videos. Click here to get to the playlist of all the videos.

I just put out a promotional CD that includes the best live and studio performances of the past 5 years, including tracks from the Karl Rehn Trio, the Luigi's house band, Midnight Express, the Brazos Valley All-Star Band, Leannasaurus Rex, Java Jazz, Tubie and the Touchtones, and Joey McGee.

You can download all the tracks as one file here, or as individual files here.

The tracks are also now available for listening on youtube. 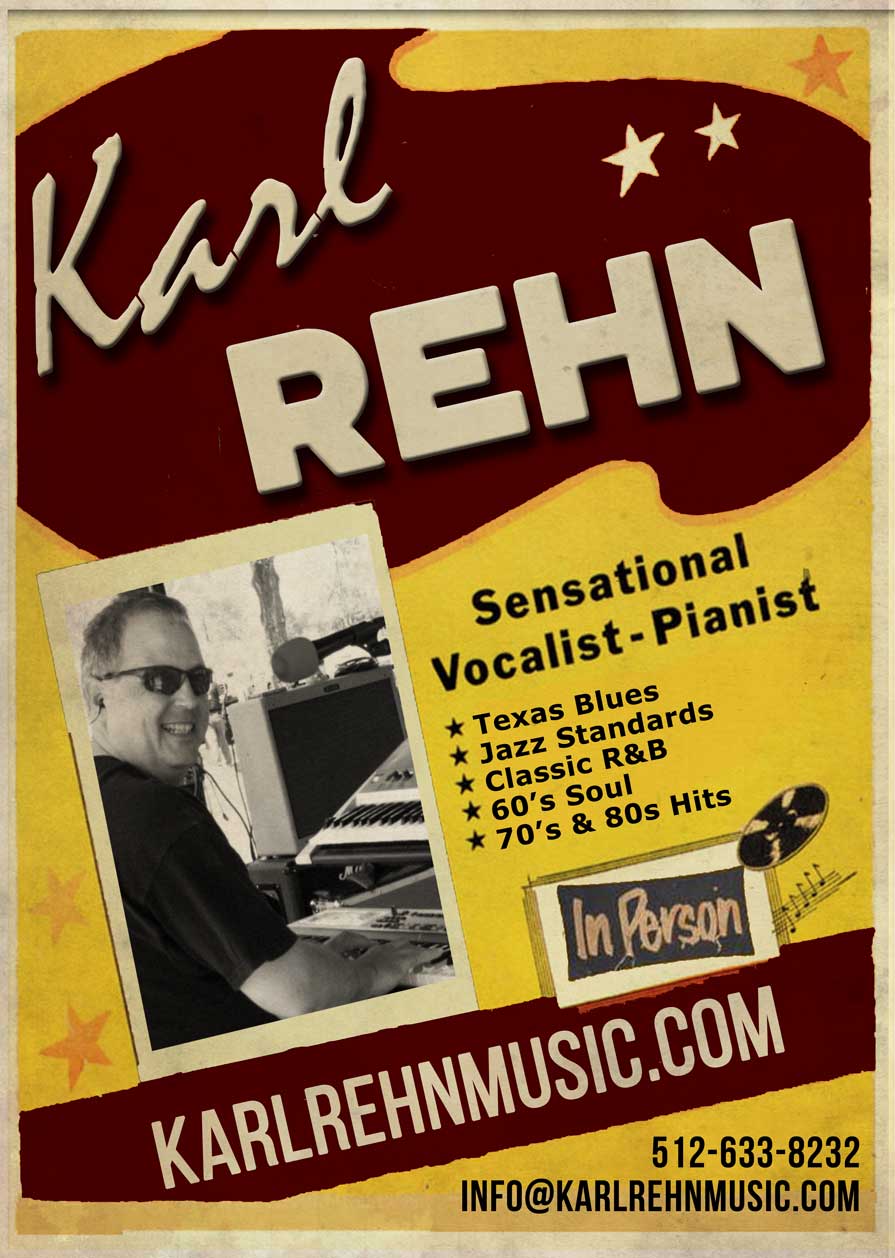 I've been playing and making music all my life, on piano, organ, synths, guitar and bass. Mostly I'm known as a jazz and blues keyboard player and singer. Over the past 30 years or so I've played lots of gigs with a lot of bands around Central Texas and released CDs of original music. Songs from my CD releases are available for download from online services such as iTunes, eMusic, Napster and Rhapsody.

Visit my youtube channel for videos with me playing with many different bands.

(January 2018) Videos of the Doc Tictock band now on my youTube channel.

(March 2017) I just released a promotion CD, containing live and studio recordings from all the bands I've played with over the past 5 years.

The new Joey McGee CD, Terlingua Taproot, is now available. I played keys on many tracks.

Tubie and the Touchtones "One More Cup of Coffee" CD release happening Nov 6th! Get the CD from amazon, itunes, or from the band. I recorded my parts back in June 2015, as their special guest.

In February 2015 I added some keyboard parts to the new Joey McGee CD, and continued work on a 3 song EP project with drummer Wayne Smith.

I was a guest on the KAMU-FM Wednesday afternoon jazz show on October 15th, 2015. The show can be streamed here, or you can download the show as an MP3 file here. Thanks to Dr. Wayne Smith of the Big Apple Trio for having me as a guest!

More tracks available for free listens and downloads on my SoundCloud page.

The new CD from Midnight Express, "Better Listen To It" was released on June 8th, 2013. The CD features 8 original songs and 3 covers. The band's influences include Chicago, Blood Sweat & Tears, Steely Dan, Tower of Power, and classic albums rock bands like the Rolling Stones, Little Feat, and Joe Cocker recorded with horn sections. The 8 original songs can be purchased online on iTunes, amazon, emusic, and other online vendors. The CD was officially released on June 8th, when Midnight Express performed as the headliner at the Starlight Music Series show, at Wolf Pen Auditorium in College Station.